On Monday 14th and Tuesday 15th of October I attended the TAUS Annual Conference in Portland. TAUS has grown from a small gathering of translation buyers into a 140 member strong group of translation industry thought leaders. I like TAUS because of this: not only attended by people who talk about translation innovation but also have the authority within their organizations to implement it.

The Keynote speaker was Genevieve Bell of Intel.

Her feisty, confident and entertaining presentation covered many anthropological topics and summed up with six dichotomies:

Human machine interaction. No more command and control but more human computer relationships based on listening and negotiation.

Difference between text and touch is that touch has not received a lot of television imagery. So expectations are lower. Translation expected to be 99.1% accurate. Touch expect to be 70%.

Genevieve’s talk was followed by a series of short presentations by a number of speakers on the topic of Content Strategies for companies born in the last and this century. Snippets:

Stuff is hoarded / Fluff is shared. Scarcity versus abundance.

Alolita Sharma: Wikipedia today supports 287 languages. Wikipedia builds sophisticated tools to support the variety of languages and then releases them as open source.

Google uses the number of pages that Wikipedia has in a particular language as one of its ROI data points.

Reading, writing, tagging, searching: all have to be available as a native experience. 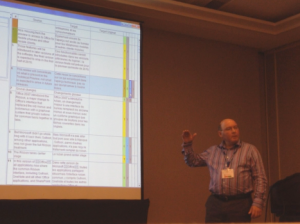 I didn’t get to many of the Localization World Conference sessions but did have plenty of interesting conversations with industry friends.

I am just back from the European Language Industry Association (ELIA) Networking Days event in Malta where I was one of the speakers. (Thanks for the introduction Renato.) This was my first ELIA event and I was very impressed. The attendees were mainly the owners or senior management personnel of translation companies. The atmosphere was business focused yet informal, open and very friendly.

The Keynote on day one was given by Sam Zindel of iCrossing. Sam started with a whistle-stop journey along the timeline of publishing history. Once we arrived at present day he talked about state-of-the-art techniques for “connecting brands to their audiences”. His style was fluid and lively and the content interesting and amusing.

Snippets that I managed to capture in notes:

I followed Sam with my presentation entitled “Building A Language Quality Pipeline With Open Standards” where I talked about the various stands of research I have been involved with over the last four years and how I was able to pull it altogether recently in a desktop editing environment. (Keep an eye on this blog for more news on this over the next couple of weeks). I think it was well received. I’m eagerly awaiting the results of the feedback forms.

After my session Juliet Macan took to the floor and gave me a reminder of the operational and business challenges of working with customers who are new to localization or at a fledgling stage of localizing. Many native document application handoffs, little or no resources (glossaries, etc.); minimal process but plenty of demands: short turnaround times, high quality standards. At VistaTEC we have been dealing with mature IT clients for many years and it was reminiscent to listen to her talk.

Other sessions that I enjoyed but couldn’t capture notes on were John Moran’s “It’s About Time: MT Evaluation and Pricing” and Spyros Konidaris’ and Michael Oettli “The Debate Series: Specialize or Do-it-all?”.

The final session of Friday was called “Bull’s Eye: The Sales Pitch”. Here contestants are given a fictitious but realistic sales scenario and they have to present to that scenario in front of their peers. I was one of the three judges and the two contestants were Arun and Natalia. This was a fun session and hopefully the contestants found the feedback useful. [I wanted to base my judging characteristics on Simon Cowell.] 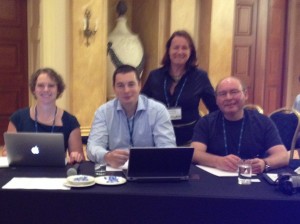 It would be remiss of me not to say Thank You to my fellow diners at my conference dinner table for a very entertaining and enjoyable evening. It was a great opportunity for me to brush up on my Russian language skills which increased through the evening in proportion to the number of vodka shots I consumed. Next time some Irish Whiskey guys.

A very enjoyable event where I managed to generate some Twitter traffic and new followers. That’s what networking is all about after all!