On 27th May we finalised release 1.0 of Reviewer’s Workbench. RW represents the culmination of several strands of research and development that I had been involved with over the last couple of years.

In 2011 I set up Digital Linguistics to sell Review Sentinel. Review Sentinel is the world’s first Text Analytics based Language Quality Assurance technology. I first publicly presented Review Sentinel at the TAUS User Conference held in Seattle in October, 2012.

In January 2012 I became a member of the Multilingual Web Language Technologies Working Group. Funded by the EU, this Working Group of the W3C is responsible for defining and publishing the ITS 2.0 Standard. ITS 2.0 is now in Final Call stage of the W3C process.

I can safely assert that Reviewer’s Workbench is the world’s first editor to utilise text analytics and other metadata that can be encoded with ITS 2.0 – such as machine translation confidence scores, term disambiguation information and translation process related provenance – to bring new levels of performance to the tasks of linguistic review and post-editing. What’s more is that Reviewers Workbench is completely inter-operable with industry standards like XLIFF and toolsets such as the Okapi Framework.

Reviewer’s Workbench allows you to personalise the visualisation of all this available important, contextual and useful data to inform and direct post-editing and linguistic review effort. 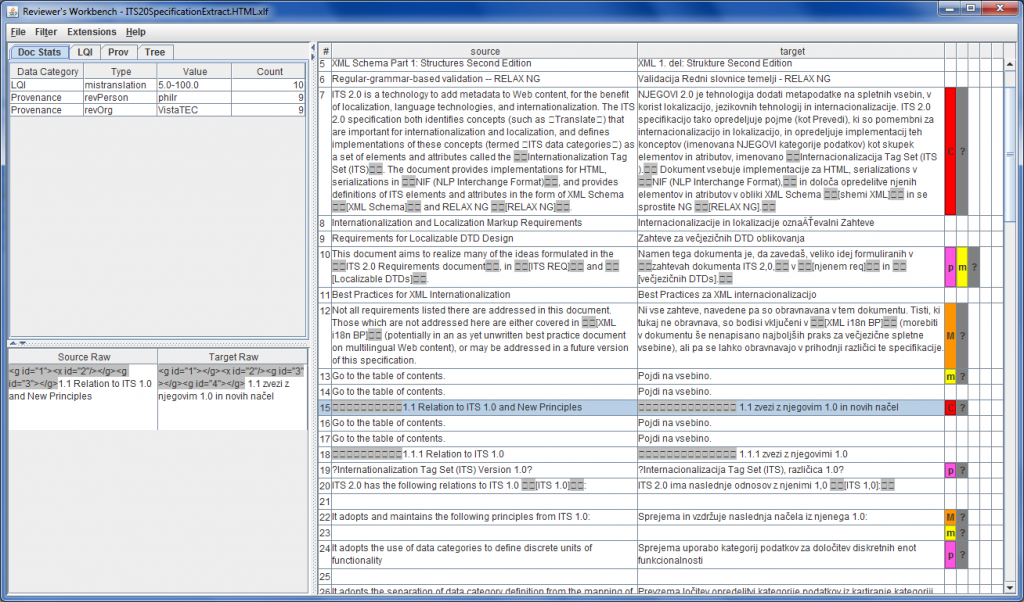 On the 27th we finished work on release 1.0 of Reviewer’s Workbench. RW is a desktop application that aims to bring new levels of productivity to the activities of post-editing, translation and linguistic review/quality assurance by utilising some recently available technologies and standards. I will write further about RW in another posting. The subject of this post is the team behind RW.

RW is the third development project that we have realised with the help of Spartan Software Inc.

Our first engagement with Spartan was in November 2012. The project was full of risks:

Result: a resounding success! The application has been running as an almost continuous scheduled process ever since without any patches. How did we achieve this:

It has been a pleasure working with Kevin Lew and Chase Tingley over the last 7 months. The pinnacle of that working relationship was today when we announced the contribution of a significant amount of code to the Okapi open-source project.

I cannot wait until we recommence work on our RW release 1.1 product backlog.