I’m using this post to both keep my blog live and also organise my own thoughts on everything that’s been going on over the last six weeks.

We deployed the distributed components of our XTM integration to production and have pushed a number of projects through it. We delivered this project through a series of backlog driven sprints. It wasn’t without its challenges: requirements changes, unforeseen constraints and aggressive timelines. Some elements of test-driven development were employed (and very useful) as were domain-driven design.

On Wednesday I was delighted to receive a tweet from @kevin_irl announcing the open source publication of their .NET XLIFF 2.0 Object Model on GitHub. Coincidentally Wednesday was also the day that my copy of Bryan Schnabel’s “A Practical Guide to XLIFF 2.0” arrived from Amazon. One of my developers, Marta Borriello, is currently working on a prototype of the XLIFF Change Tracking module which includes support for inline markup inside of Ocelot with the hope that this will be part of XLIFF 2.1.

Machine Learning is one of my primary interests but sadly a tertiary focus after the “day job” and family (don’t you listen to their denials). Hot on the heels of machine learning is programming paradigms and languages. So with a peak in travel I decided to combine both and downloaded “Machine Learning Projects for .NET Developers” by Mathias Brandewinder and four F# courses from Pluralsight and got myself up to speed on functional programming. This turned out to be a really valuable exercise because I got to understand that functional programming gives you much more than immutable data and functions as first class objects. There’s sequences, partial application and composition to name a few. One day I plan to re-implement Review Sentinel’s core algorithms in F# but don’t hold your breath for a post about that.

I’m just back from a FREME Project hackathon in hyp-zig. Two days of enthusiasm-fuelled fun creating and querying linked data with guys at the forefront of of this exciting technology. We hacked topic/domain detection/identification using the services of the FREME platform. 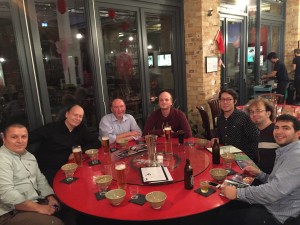 Today I attended an ADAPT Governance Board meeting. ADAPT is the evolution of the CNGL CSET into a Research Centre. I think ADAPT has a great research agenda and has numerous world-class domain thought leaders. I’m looking forward to working with the ADAPT team during 2016 to push a few envelopes. My engagement with academia and research bodies at both national and European level over the last 10 years has been of great tangible and intangible value (no I don’t just mean drinking buddies). I have to thank Peter Reynolds (who will never let me forget it), Fred Hollowood (who will have an opinion about it) and Dave Lewis (who will be typically English and modest about it) for helping me overcome the initial inertia and Felix Sasaki who has made the bulk of it demanding, rewarding and enjoyable.

In January we commenced an enterprise subscription with translation management technology provider, XTM. It is well known that since 2008 our primary workflow backbone has been powered by WorldServer. So what was our motivation to try XTM?

The primary drivers for investing time and effort in XTM are:

Having carried out a superficial evaluation we felt we had some candidate customers and projects for which we could do some comprehensive pilots. However, in this business plans always change and our first project turned out to be very large: circa 30 million words across 16 languages with a TM/MT+PE workflow.

This project also has some other interesting characteristics:

Projects this large with a fast ramp-up time will soon identify process and technology weaknesses. XTM support have worked diligently with us to provide new and enhanced facilities and bug fixes to keep everything on track.

By the end of September I hope that we will have completed a second significant customer integration which uses some of this same infrastructure.